Many people are against  featuring them on TV. The straight ones think it glorifies homosexuality and fear that their kids may become gay, while gays are against it because it shows them as feminine sex freaks.

But what really interests me is the people who find it funny.

You see, 2 weeks ago, I was watching TV with my family and “Majdi w Wajdi” got on (they were begging the prison guard to let them go to prison while they carried a bag of soap). I was laughing. My family was laughing. The average Lebanese viewer was laughing.

But were we all laughing at the same thing?

I was laughing WITH Majdi & Wajdi.

Everybody else was most probably laughing AT Majdi & Wajdi. 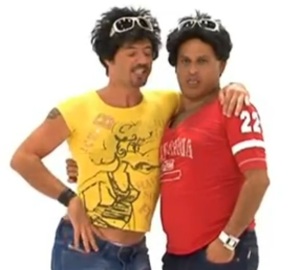 I’m gay and I get it. I have my feminine moments and talking in a girly way is a part of our gay culture. It’s not something bad. But when you take that small part and base your entire skit around it, you end up showing a one dimensional side of gays.

But at least the show’s keeping the conversation going.

Viewers love the actors Adel Karam and Abbas Chahine who play the characters, so the love and respect they have for those actors can indirectly translate to some likability for Majdi and Wajdi.

They even have a fag hag Tee Tee (pronounced Tsee Tsee) in the show who’s very supportive of her two gays, so that’s good. That shows the viewer that these gays have straight friends who don’t laugh AT them but listen to their problems (and boy drama).

So like it or not, Majdi and Wajdi are a part of Lebanese pop culture.

But at what price? Only time will tell…