The level of absurdity in the gay community right now is on another level.

We are acting so fucking absurd. So ridiculous. So fuckin… like dude… what’s the word? Impostulous. Yes, impostulous! I’m making a word up because no other already-existing word could do what I’m feeling justice. We gays right now are acting so impostulous. Like it’s not normal.

We’re ridiculous. We’re absurd. And the worst part is we don’t know that we are. Cause we’re numb.

What’s ridiculous is us gay guys sharing our dick pics with each other even before sharing our face pics. We’re like: “hey, what’s up? Nice to meet you! Oh you’re from Hamra! Cool. Now imagine thiiiiiiiis up your asshole!”.

Call me old-fashioned, but I don’t want to see your dick before we sleep together. Whatever happened to keeping some things as a surprise? I miss that feeling when you’re on a date and you wonder “wow, I wonder what he’s packin under those jeans. Can’t wait to unveil that shit”. Now you go on a first date and you know for sure that he’s cut, that he has a shaved asshole, that he has curly pubes, that he has one abnormally saggy ball (guilty), and that he has a mole on his shaft.

I’m no saint and I’m not saying one night stands are bad. Have you MET me?

Like this guy I was chatting with yesterday. He said he’s looking for a serious relationship and when I asked him to share his body pic, he sent me a dick pic. After expressing my what-the-fuck-ness at his impostulous-ness, he was like: “Oh, well, you said a body pic”. Well, yeah, asshole, a body pic. Not a dick pic! What a great fairytale story. I imagine tellin it to our kids: “Daddy knew he loved daddy when daddy sent daddy his cock pic before their first date and daddy came on the computer screen without touching himself”. Forget impostulous…that’s true love right there. 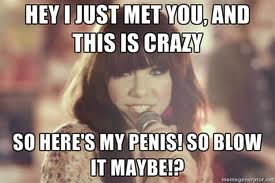 7 thoughts on “The State of Being Impostulous”